Outhouse Wolves and Other Stories

A couple of weekends ago, we headed west of UB with some colleagues from our school to spend the night in the countryside with a herding family. The connection to this family was that the patriarch was the brother of the husband of one of our school’s headmasters, which was great for a couple of reasons. 1) It wasn’t a tourist camp so we had a more authentic experience, and 2) because we were connected, it didn’t feel like we were with total strangers. Our host family was so friendly and hospitable, and we had a great time!

What was neat about this particular location was that it held a variety of landscapes. We stayed in gers on the steppe, but we were surrounded by mountains and about a 30 minute walk away from where we stayed was a large stretch of sand, including quite a few dunes. We were told this stretch of sand runs from the Gobi up to Lake Khuvsgul in the north. So in a way, we visited the Gobi. 😉 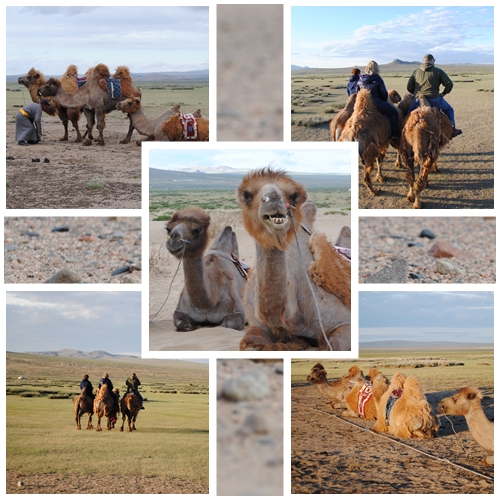 Camels are one of the five key livestock kept by Mongolian nomads. (The others are horses, cows, sheep, and goats.) The Bactrian camel is native to Central Asia, and they are helpful beasts of burden in addition to providing wool for textiles and milk for dairy products. As you can see in these photos, the camels our host family had were in the process of shedding their thick winter coats and were semi-balding. There were camels that we used for riding, and other camels that were not–mamas and babies. One of the baby camels had been attacked by a wolf recently, so one of its hind legs was wounded. The family had been giving it antibiotics. The morning of our second day, that baby camel was on its feet and nursing. It was certainly favoring the wounded leg, but there’s hope for a full recovery!

Our ride took us a half hour out from camp to the stretch of Gobi sand (then back another half hour). The camels liked crowding each other as we rode, so I have some pretty gnarly bruises above my right ankle from when my camel crushed my leg into the neighboring camel’s metal stirrup, but there was no bolting, biting, or spitting, so I’d count that ride as a win. 😉 On our return walk/ride, one of our colleagues sang us a traditional Mongolian long song. He grew up in the countryside–not the city–so for him, being back where he grew up is always relaxing and nostalgic. 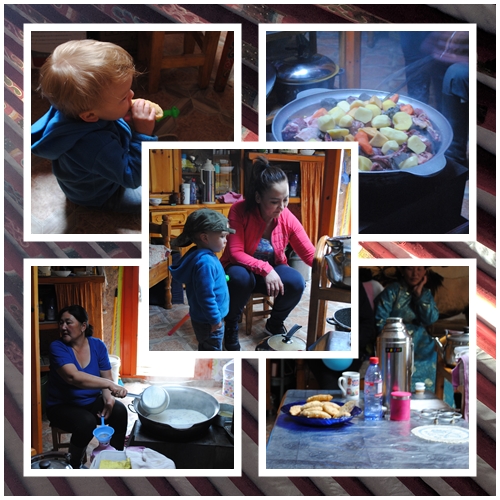 One thing that happens whenever we spend extended time with Mongolians is that we eat so. much. food. Personally, I can’t complain because I love eating, but some foreigners feel overwhelmed by how much food they are offered and don’t know if it’s ok to turn it down. (It is, but be nice about it and try to eat something!)

Our hosts served us a variety of traditional foods, including milk tea, khuushuur, and khorkhog. Khuushuur are fried meat pies. Some of the khuushuur were stuffed with mutton, and others were stuffed with “sheep stomach” (which tasted like minced organ meats, and not just tripe). That picture of Z eating a khuushuur in the top left? Sheep stomach! He was also interested in watching the frying process. The top right photo shows how the khorkhog was prepared. One sheep was butchered and the meat and bones were layered with minced onion, hot rocks from the stove, salt, potatoes, and carrots in a giant metal bowl with water on the bottom. The whole thing was covered and cooked for about an hour, turning into the most delectable meal.

In the morning, we had leftover mutton from the khorkhog, boortsog, more milk tea, coffee (!), rice porridge, and fry bread. Sadly, I wasn’t in the ger when they made the dough for the fry bread, so I’m not sure I’ll be able to recreate it at home, but I am definitely interested in trying. Delicious delicious food!

When we first got to where we stayed over the weekend, Z was fairly shy, but he warmed up and ended up quite sad when we left. He was particularly enamored with the kids and lambs that stayed around the gers, and very much enjoyed chasing them. I don’t think they minded much, but I did worry that their mothers would be less than thrilled.

I don’t like to be the type of mother who hovers over her children, but there were a number of concerns that I had to balance while we were out of our normal. Z is not around animals enough here in UB to know that some animals are safe and some are not, so I had to corral him away from some of the livestock–like the overprotective camel mama whose baby had been attacked. She was a mama on a mission. I was also worried that Z would wander into the outhouse, which wasn’t deep, but also had no door on it and was exposed on one side and the top to the elements. I don’t know about you, but I’m not keen on fishing my toddler out of a toilet. 😉

Speaking of toilets, I needed to use it during the night. I had somewhat seriously told Eric as we got ready for bed that if I needed to pee before daybreak, I would just pee in one of the unused diapers we had brought along rather than go outside at night because of the wolves. (Ok, maybe just wolf–singular–but apex predator I am not.) Around 3:30am, well, I needed to go, and Eric (who was also awake) convinced me that I shouldn’t use a diaper for my bathroom break. I was still hesitant to use the outhouse–WOLVES, people!–but I decided maybe I could just pee behind the ger. I didn’t want to bring my phone for its flashlight because it’s hard enough to pee outside without peeing all over yourself in a squat without also having to juggle a light source. Anyway, once outside, I realized the moon was bright enough to cast shadows so I opted to use the outhouse. I know, I know. All that fuss for nothing. I was thankful for not needing a flashlight for that trip though because I have a record of losing items down outhouses. (RIP first Fitbit.) For the record, I squatted facing out so that if a wolf decided to take me down while in the outhouse, I’d at least see it coming and know my fate. My tombstone would have read: Here lies Bethany. Dead from outhouse wolves.

We are just so flippin’ blessed to have the relationships that we do with Mongolians. Over the years, we’ve worked alongside educators, administrators, students, business folk, and more. Our children have been loved by all. We’ve written numerous recommendation letters, proofread so many essays and applications, and coached and encouraged and been coached and encouraged in return. Mongolian doctors have delivered both of our babies and been invested in their growth. Whenever folks ask me what my favorite part of living in Mongolia is, I tell them it’s the people, and this weekend reminded me again as to why.

PS. I had the bulk of this post written the night we came back from the countryside, but then things got really crazy so I only just finished wrapping it up.